Last month, Jupiter returned to her own sign of Sagittarius. This was a happy transit for many of us, and Jupiter will remain in Sagittarius for about a year. The light-hearted and optimistic mood will continue through the month of December, which should make for a lovely holiday season. Read on to learn more about the transits of December 2018. 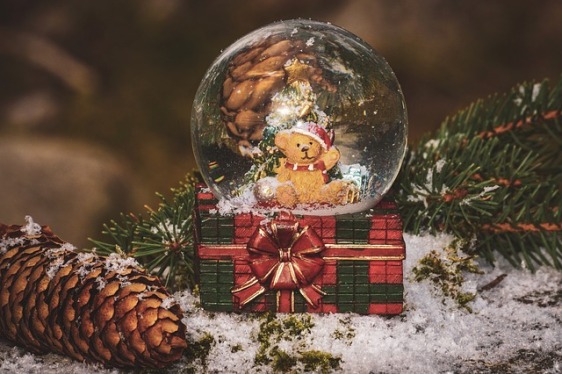 December 1 to December 6 – A Serious Interlude

Although the month of December will be light-hearted for the most part, as we enter the 3rd Quarter Lunar Phase, things may get serious for a few days. This is because Mercury, which has been going backward or retrograde, will go back into Scorpio, and Venus which had been in her own sign of Libra will be going back into Scorpio.

This will not be nearly as intense as things have been through the Summer and Fall of this year. Instead, we will see an opportunity to deal with unfinished emotions in order to heal them.

Mercury will go back into Scorpio on the 1st, and Venus will return to Scorpio on the 2nd.  The Sun will square Mars on the 2nd as well. These days may seem more serious and tense than things have been in the past couple of weeks. Also, some of the difficult issues from the Fall may rise to the surface again. The good news is that most people will be in a more forgiving and generous mood than they were then, so it will be much easier to resolve any conflicts that come about.

The Moon will transfer Venus’ light to Mars today. This will give a good opportunity to heal any relationship issues, particularly for those who have planets in the Water Signs of Cancer, Scorpio, or Pisces.

Today, the Moon will visit Jupiter and Mercury will turn direct today. This should be a fortunate day, particularly for those with planets in the Fire Signs of Aries, Leo, and Sagittarius.

The New Moon of December 7 will be light-hearted one. It will take place in Sagittarius. Jupiter being in this sign as well will give extra buoyancy and cheer to the season.

The one difficulty will be that it will be square to a Mars/Neptune conjunction in Pisces. It is possible that matters that had previously been concealed will come to light, bringing disillusionment. It also could lead to carelessness, particularly for those with planets in the Mutable Signs of Gemini, Virgo, Sagittarius, and Pisces.

Despite that difficulty, this looks to be a relatively nice lunation.  This would be a good time for travel or a vacation if it is possible for you. 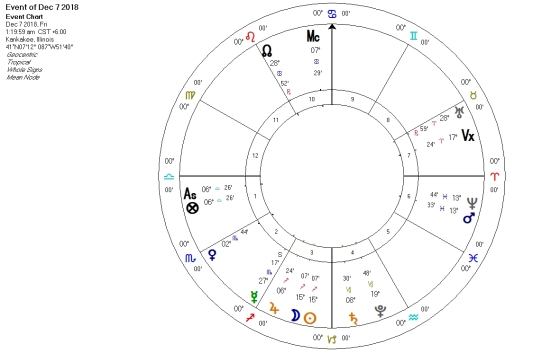 Today the Moon will conjunct Saturn and then transfer Saturn’s light to Mars. Because both Saturn and Mars are dignified and in good aspect to each other, this will bring out the positive and productive side of both. This will be a good day to get work done.

Mercury will be back in Sagittarius today. While this will add to the spirit of the season, it may be hard to keep focused and clear-headed. Try not to go overboard with holiday spending.

Venus will be past what is known as her shadow. This means she will be further along than she was when she went retrograde back in October. This will mark the final conclusion of the planetary adventures through the Fixed Signs of Taurus, Leo, Scorpio, and Aquarius that have been a major theme of this past year.

The Moon will also go past Uranus today, which could lead to some minor, temporary disruption.

Mercury will conjunct Jupiter today, which will lead to a good opportunity for lively and interesting discussions. The Sun will enter Capricorn as well as bringing a more serious attitude with it.

The Full Moon of December 22 will occur the day after the Sun enters Capricorn, with the Cancer opposing it from Cancer. While we will still have the benefit of Jupiter’s presence in Sagittarius, this Full Moon will bring a more serious tone than we have had recently. The Sun is working its way to a conjunction with Saturn. This will bring an air of motivation and pragmatism. This will be a good time to get things done! 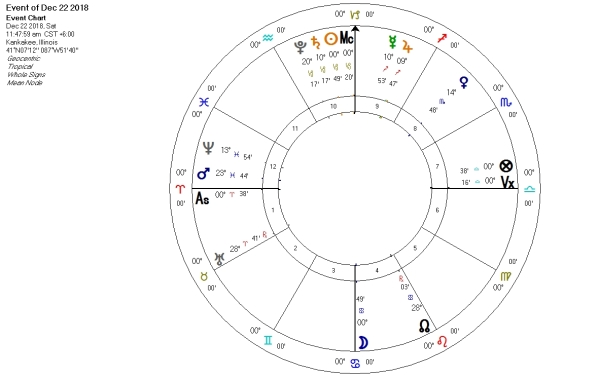 There will be a Grand Trine in Water today between the Moon, Venus, and Neptune. Emotions will run high today, and those with planets in Cancer, Scorpio, and Pisces will be right at home. Everyone else may feel a little foggy. While this may be a good day for inspiration, be careful, as Neptune can trick you into making bad decisions. Make good use of the Capricorn energy to keep yourself grounded, and everything should be fine.

Mercury will go past her shadow today and at the same time, she will square Neptune. If you allowed yourself to be fooled by Neptune in the recent days, you will know about it today.

The rest of this month will be free from major aspects, making for a relatively uneventful week.