There are many different ways to analyze current astrological events. The discipline of astrology studies cycles within cycles. In order to do this, it is necessary to take a moment in time and analyze the position of the planets at that moment. Some moments in time pass quickly while others impact longer periods. Whenever the Sun enters one of the Cardinal Signs, which are Aries, Cancer, Libra, and Capricorn, the chart for that entry or ingress impacts the entire season to come.

The reason for this is that if we are using the Tropical Zodiac, the Cardinal Signs begin on the equinoxes and the solstices. The equinoxes are when the length of day and night are equal, and the solstices are the extreme points with respect to the length of day or night. The Sun’s ingress into Capricorn marks the shortest day in the Northern Hemisphere, or the Winter Solstice and the longest day in the Southern Hemisphere, or the Summer Solstice. The chart for the Capricorn Ingress will color events until the Spring in the Northern Hemisphere or the Fall in the Southern Hemisphere.

With that in mind, let us look at the Capricorn Ingress of 2018.

When looking at an Ingress chart, it is important to realize that it will look different depending on where you live.  I cast this chart for where I live. The planets will all be in the same place no matter where you are, but the Ascendant, Midheaven, Part of Fortune, and the Houses the planets fall in will vary. For this reason, I will only analyze the planetary placements. Also, for those who are interested, the wheel that I used has the Egyptian term rulers on the outer circle. Term rulerships are one of the Essential Dignities used in Classical Astrology.

On its own, this configuration would give a jovial and carefree stamp to this chart.  Yet, the Fixed Star Antares changes the meaning quite a bit. 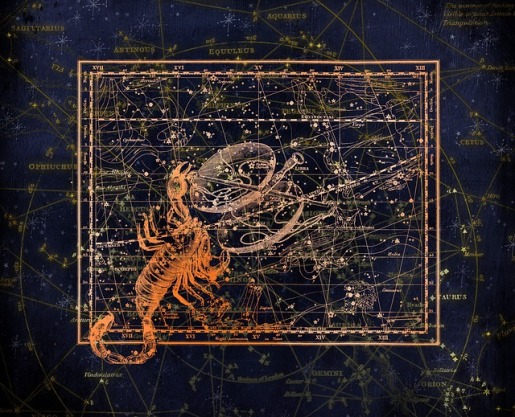 Antares is one of the four Royal Stars of Persia and is the Watcher of the West. This star sits in the constellation of Scorpio and is known as the Heart of the Scorpion. As a Royal Star, this adds great power to the conjunction, but it also adds quite a bit of depth and a bit of a darker quality. In many ways, Antares adds a strong Scorpionic quality to this conjunction.

Both Mercury and Jupiter are applying to a square with Neptune, and of course, Mercury moves faster, so will perfect the square first.

This is likely to manifest in the exposure of things that had been hidden and bringing them to the surface. While this will happen primarily on a larger level within politics and world events, it will also impact many on a personal level. The people who will feel the greatest impact of this are those with planets and chart points in the middle degrees of the Mutable Signs, Gemini, Virgo, Sagittarius, and Pisces.

Venus has just gone past a trine with Neptune, which gives further testimony that any willingness we had to cover up illusions and let them slide is now over.

Saturn has been in Capricorn since around this time last year. This year Saturn is moving into the middle of this sign and is moving in to form a sextile with Neptune. While a sextile is generally an easy aspect, in this case, just touching Neptune in Pisces will add to the testimony of illusions being uncovered with hard and cold reality.

By definition, at the Capricorn Ingress, the Sun is moving into Capricorn. The Sun has a very wide orb, so it already in conjunction with Saturn. This means that it will be time to get to work. The good news is that this will give a lot of energy for practical endeavors, even though it will not necessarily be a lot of fun.

The Capricorn Ingress will take place the day before the Full Moon. The Full Moon of December 22, 2018 was discussed in the transits article for this month. In this chart, however, it is still in the 1st Quarter phase.

This means that this season will see things develop and reach maturity. The Moon is still in Gemini, which lightens up a very serious chart.

On the other hand, the path of the Moon goes from a square with Neptune to a square with Mars. This seems to be even more testimony to the theme of challenging illusions.

What Does All of this Mean?

A rather clear theme has emerged from this Capricorn Ingress. This next season will be a time of getting to the heart of things and confronting any illusions or delusions that we may be living under.

While this may sound unpleasant, overall, it is likely to be very healing. This will be a time of cleansing and getting down to business. Even though some of this will be hard and serious, if we do what is being asked of us, we are likely to reap great rewards. While we do have the taskmaster, Saturn fixing us with her stern gaze, we also have the kindly Jupiter ready and waiting to give us all manner of blessings and good things.

One thought on “Capricorn Ingress 2018”