For an explanation of Eclipse Seasons, please read the article below:

Eclipse Seasons and Saros Cycles, The Solar Eclipse of August 11, 2018

This article also explains Saros Series, which will be discussed later. 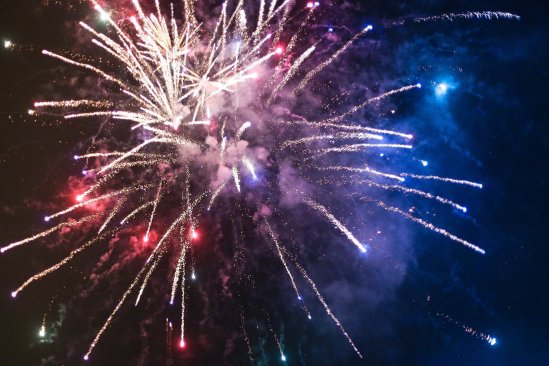 Where We are Now

This has been a very active Eclipse Season. The first eclipse was a Lunar Eclipse on June 5, 2020.

For information on this Eclipse, see the article below:

Below is the article discussing this Solar Eclipse:

For the record, and for readers of this article in the future, there is so much going on in the world right now that it is impossible to list. Some of the most important things at the moment seem to be a border skirmish and standoff between China and India right along the path of the Solar Eclipse of June 21, 2020, and a surge of Covid-19 cases in many places in the world, including, and perhaps especially in the United States.

This brings us to the Lunar Eclipse that will begin on July 4 and continue through the wee hours of the morning depending on where one lives. This is happening on the night in which those in the United States celebrate their Independence Day, shortly after the time that it is customary to hold fireworks demonstrations.

This Lunar Eclipse will be visible in the United States mainland and throughout North, Central, and South America. It will not be visible in Alaska or in the Northernmost parts of Canada. In addition to the Americas, it will be visible in most of Africa, the British Isles, Italy, France, Spain, and Portugal.

Below is the map of visibility for this Eclipse:

This will be a very faint Appulse Eclipse, barely visible. Even so, it will occur on a day of ritual significance for the United States, and it will be visible there.

The reason that this Lunar Eclipse will be so faint is that the Saros Series it belongs to is quite young. It is only the third eclipse in the series. The first eclipse from this Saros Series occurred on June 13, 1984, and was visible in East Asia and Australia. The second eclipse occurred on June 24, 2002, and was visible in all of Africa, Australia, and the Middle East, as well as most of South America and Europe.

Because this Saros Series is so new, it is hard to know what its theme will be. When I looked at the events that happened on or around the eclipses where they were visible, there were several. Yet, with there only being two previous eclipses, it is not really possible to see a recurring pattern yet.

All we can do at this time is to look at the chart of the first eclipse in this Saros Series. 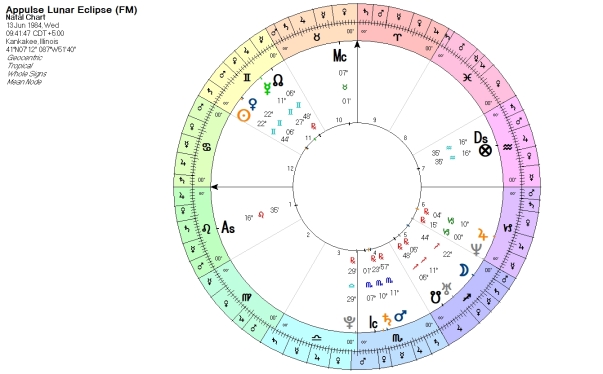 Unfortunately, this chart does not look benign by any means. Two key features of this chart are a tight opposition between Mercury and Uranus at the Nodes and a conjunction between Mars and Saturn in Scorpio. Of these four planets, only Mercury is going direct. The rest are retrograde. The disposition pattern shows two dispositors, Mercury, who governs Venus and the Sun, and Mars, who governs the rest of the planets. Mercury and Mars are averse and cannot see each other.

This indicates that this Series will relate to explosive and potentially revolutionary ideas coupled with an impulse to return to darkness, violence, and cruelty from the past. Though these themes will both be present, they will be disconnected from each other. The right hand will not know what the left hand will be doing.

Of course, this is speculation based on the chart. This Saros Series will not mature enough to produce Total Eclipses until 2489 C.E., well beyond the lifetime of anyone alive today.

So now that we have looked Saros Series 149, let us examine the chart of the upcoming Lunar Eclipse from this series.

This is a relatively cold chart. Five out of seven traditional planets are in cold signs. The main polarity is between Cancer and Capricorn, indicating a return to issues surrounding the Home and the Marketplace. Jupiter and Pluto are in a tight conjunction, with both planets going retrograde in Capricorn. Saturn is also in Capricorn, returning from her brief foray into Aquarius.

This indicates that many places, especially those that are in the path of this Lunar Eclipse will be returning to quarantine. The pandemic is far from over, and it looks like the current uptick in cases in the Americas will continue.

Mars has moved into Aries, where it will remain through the rest of the year. The Sun and Moon are separating from a square with Mars, and Venus has separated from a sextile with this planet. This indicates that the public’s attention is shifting away from the recent political unrest and has returned to the pandemic.

Yet, in looking at the disposition pattern, it is clear that the topics of the recent unrest have not gone away. Saturn is the final dispositor of all of the traditional planets, except for Mars, who is in her own sign. This indicates that the unrest is just as strong as it was, even if no one is paying attention to it at the moment.

Mercury had also separated from a square with Mars but has turned around and is now approaching a square again. The first square between these planets was between the Mutable Signs of Gemini and Pisces. The next square will be between the Cardinal Signs of Aries and Cancer. This indicates that not only will the issues involved in the recent unrest return, but that they will return with a vengeance.

Now that we have examined the Lunar Eclipse of July 4-5, 2020, which is also the Lunation for the next couple of weeks, let’s look at the day to day transits.

This will be the day that the square between Mercury and Mars will be exact. This may be a difficult day. On a personal level, do your best to avoid conflict. Tempers will be on edge all around. This is not the time to negotiate or engage in difficult conversations.

Mercury will go direct, and the Sun will trine Neptune. On the one hand, communication problems inherent in Mercury retrograde periods will subside, but there will still be the tendency to become deluded by flattery. It is important to be sensible and take things with a grain of salt.

The Sun will oppose Jupiter on July 14 and Pluto on July 15. Throughout 2020, Covid-19 spikes seem to coincide with Pluto transits, particularly in the United States. This is a good time to take extra precautions to stay safe.

This may seem like a bit of a grim forecast, and we have become used to those lately. It is important to keep in mind that this is all part of the change that is coming. Things have to fall apart before they can be rebuilt.

For an overview of these changes and the deeper meaning behind them, see:

Below are some recommendations for these next couple of weeks: