Mars will be in Taurus through all of March, and Mercury will be retrograde in Pisces from March 6 through March 28. This will make it hard to get things accomplished for many people because they will feel foggier than usual. There will also be a greater likelihood of careless errors. Other than that, it will not be a difficult month. So long as they are not trying to get anything done, most people will be calm and in a good mood. For this reason, if at all possible during this month, leave yourself enough time for projects and do not try to do anything at the last minute. Also, if you can, try to minimize your workload. 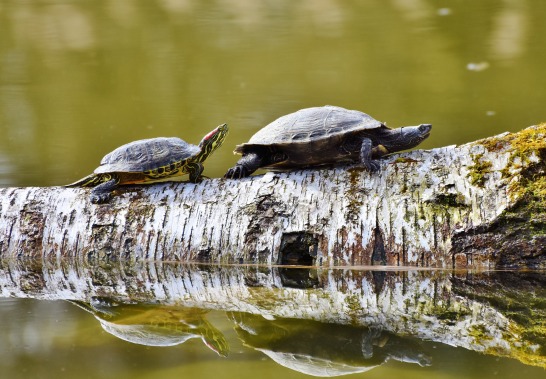 March 1 to March 5 – Getting Things in Order

This will be a good time to bring as much order to your life as possible. Mercury is in Pisces, but she is still direct. The more that you can do before the retrograde period, the less risk there is for chaos during the rest of the month. The transits are still relatively mild. As much as you can, avoid starting anything new right now, but instead focus your energy on tidying things up. 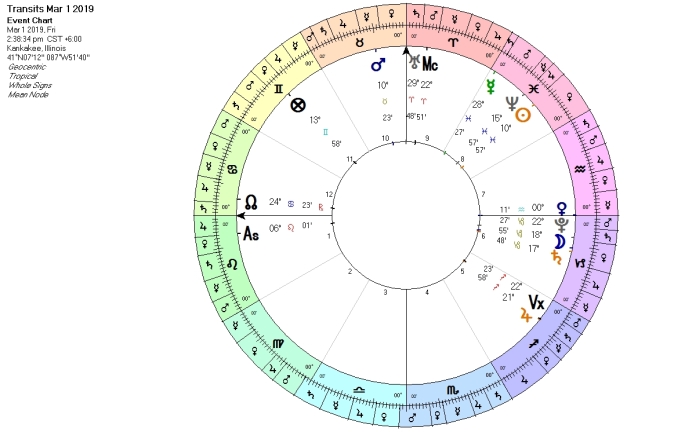 Venus will square Uranus and then move into Aquarius. There may be some tension in relationships, but any problems will short-lived and easy to manage.

The New Moon will be on March 6. It is usually advisable to start new projects during the New Moon phase, but this one will not give much support for practical ventures. 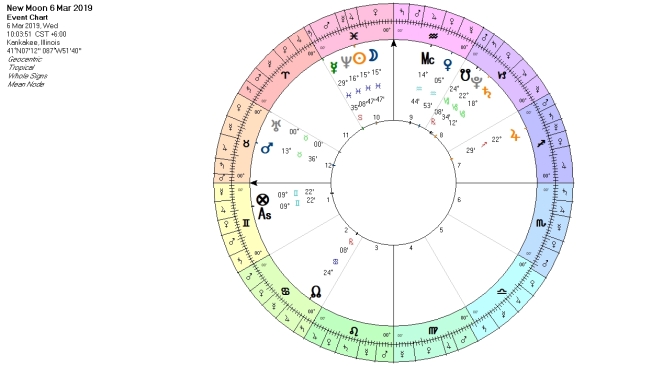 Not only is the New Moon in Pisces, but it is conjunct Neptune. To top it off, Mercury is turning around to go backward and is in Pisces as well. This will make many feel disoriented and vague. Those who have planets and important chart points in Gemini, Virgo, Sagittarius, or Pisces will feel this the most strongly.

This is also the day that Uranus will enter Taurus, and this time it will be to stay. This will mark a 7-year period of potential disruption to the Fixed Signs.

There is some balance to this chart, though: Mars in Taurus and Saturn in Capricorn will provide some grounding, and Venus in Aquarius will give some objectivity. Jupiter in Sagittarius will mitigate the damage caused by mistakes and errors.

The Sun will sextile Saturn on March 9, and Mars will sextile Neptune on March 10. This will give an infusion of Earth to the recent watery vagueness. If you must get things done during this month, these two days will be relatively productive.

The Sun will be sextile Pluto and square Jupiter. These transits could be very mild or it could be difficult depending on how you react to events around you. Think twice and check your facts before taking action, and these transits may pass by unnoticed.

Mars will trine Saturn, and Mercury will join the Sun. This promises to be another day of heightened productivity.

Mercury will make the same transits that the Sun did on March 13, and will end by forming a sextile with Mars. This could result in further misunderstandings if you are not careful. These misunderstandings could turn into a more lasting rift, so check your facts before getting angry at someone.

March 20 to March 31 – Stirrings of Activity

The Full Moon will occur at around the same time as the Sun goes into Aries. The Sun’s entry into Aries marks the astrological new year.

This Full Moon will bring with it a feeling of restlessness. It will infuse some Cardinal energy into what has been a rather listless time. Yet, Mercury will still be retrograde in Pisces, and Mars will still be in Taurus. This can be likened to a sense of slowly starting to wake up rather than a quick burst of life.

Aside from the Full Moon on March 20, there will be a small flurry of transit activity as well. Mars will trine Pluto and Mercury will sextile Saturn. On March 21, Venus will square Mars and sextile Jupiter. These are part of the first stirrings of energy foreshadowing a more active period to come.

Mercury will join Neptune for a second time. This happened for the first time on February 19, 2019. This will be another influx of fogginess and vagueness. Try to avoid anything crucial regarding paperwork or communication today. There is a high risk of carelessness and errors. Even if you are not affected, the people that you are interacting with might be.

On March 26, Venus will enter Pisces! Venus is exalted in Pisces, making her sojourn there a good time for relationships. People will be feeling more romantic and forgiving than usual. Unfortunately, on March 27, Venus will also sextile Uranus.

Venus’ stay in Pisces will be a good time for dating or for a romantic getaway, but it is best to wait until after March 27.

Mercury will go direct today. She will still be in Pisces, but the foggy haze that has been in the air during March will start to lift.

Mars will leave Taurus and go to Gemini. This will bring back some energy and movement, and it will relieve the recent feeling of lethargy.