The concept of sect, or the division between day and night, is a primary consideration in Traditional/Classical Astrology, and it corresponds to the hot/cold polarity in temperament. This consideration carries over to Essentialist Astrology. The day/night division has been tied to gender since at least the Hellenistic Era, with day being associated with masculine and night being associated with feminine. This gender correspondence is an apparent Patriarchal redaction, and it is rejected in Essentialist Astrology. It is also redundant and adds nothing to the system. Day and night are perfectly adequate descriptors for this polarity, without the need to bring in gender.

There is another polarity in astrology, which is just as important as the division between day and night. This polarity gets muddled with day and night, but it is separate and distinct. This is the wet/dry polarity. It is very possible that this polarity became muddled as a part of the apparent Patriarchal redaction which assigned gender to sect. While adding a new gender classification in this day and age is highly controversial and unnecessary, having some classification for the wet/dry polarity is quite useful. Thus, I will use the term consistency for this polarity with a soft consistency corresponding to wet, and a hard consistency corresponding to dry. To my knowledge, these terms are not found in any known tradition, but merely adding a new name to a well-established concept is an adaptation rather than an innovation, and thus it is acceptable in Essentialist Astrology.

The soft principle corresponds to the wet temperament and is one of blending and merging. It considers the whole and tries to see how things are similar rather than how they are different. It also tends to be gentle. Instead of engaging in direct conflict, it gives way to opposition. The soft principle is yielding and bends so that it does not break. It tends towards the creative rather than analytical.

In astrology, the soft elements are Air and Water, and the soft signs are: 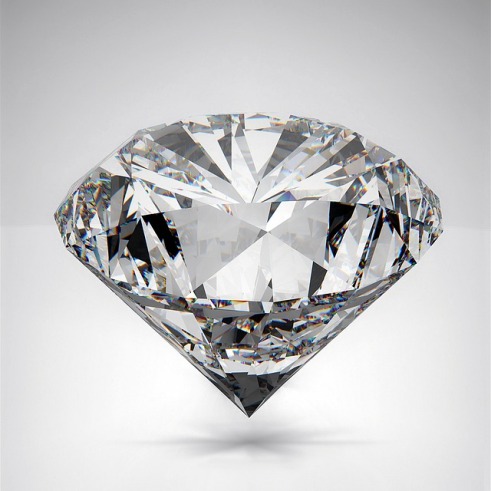 The hard principle corresponds to the dry temperament and is one of separating and dividing. It considers classifications and tries to see how things are distinct rather than how they are the same. It also tends to be strong. The hard principle does not shy from direct conflict and stands firm in the face of opposition. It tends towards the analytical rather than the creative.

In astrology, the hard elements are Fire and Earth, and the hard signs are:

The Soft and Hard Polarity

The polarity between night and day is relatively harmonious. Night follows day and day follows night in a gentle and predictable rhythm. There is a seamless pattern between activity and rest. The day signs and the night signs have little in common with each other, but they do not engage in conflict with each other either.

The polarity between soft and hard, however, can be deeply divisive. In any controversy one can think of, the fundamental issue is along the soft/hard polarity. In physics, the fundamental controversy has always been whether the universe is made of “things,” distinct particles, or “stuff,” continuous substance or waves. In linguistics, it has always been between the “lumpers,” those that see how different languages are similar, and the “splitters,” those that see how different languages are distinct. In reading education, it is between “phonics” and “whole language.” In language learning, it is between traditional grammar instruction and immersion. The list goes on and on.

The truth of the matter is that in all of these controversies, the real answer is that both are right and necessary. There is an interplay between soft and hard, which is just as necessary as the interplay between day and night. If everything were soft, we would not have diversity or know what anything was. If everything were hard, it would eventually break down into nothingness. We need both. 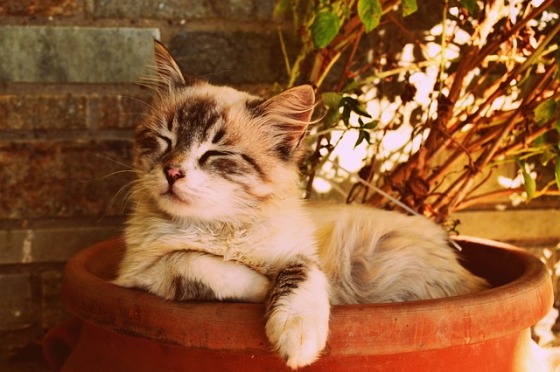 The Two Polarities in Astrology

The complicated way that the polarities behave can be seen in astrology. In astrology, the signs are related to each other by aspect. The aspects used in Essentialist Astrology are the same as those that are used in Traditional/Classical Astrology, and they are based on the principles of Sacred Geometry.

There is an interplay between all of the other aspects and the polarities, as is discussed below. 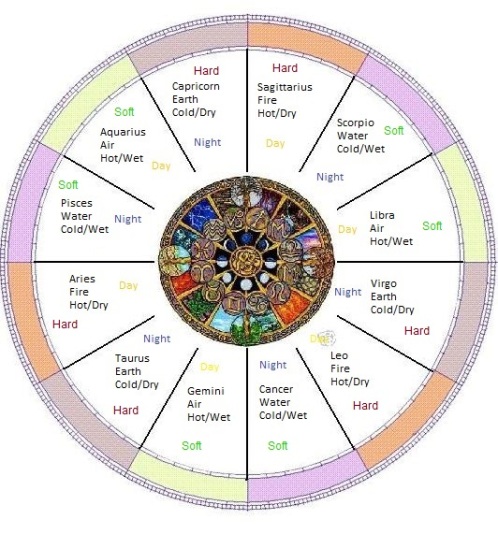 As you can see from the above chart, day and night signs alternate around the zodiac. Soft and hard signs are a bit more complicated. All opposite sign pairs (signs 180° apart, based on the number 2) are of the same sect, with one hard sign and one soft sign, as can be seen below:

This is the astrological reason that the hard and soft polarity tends to be more heated and contentious than the day and night one. 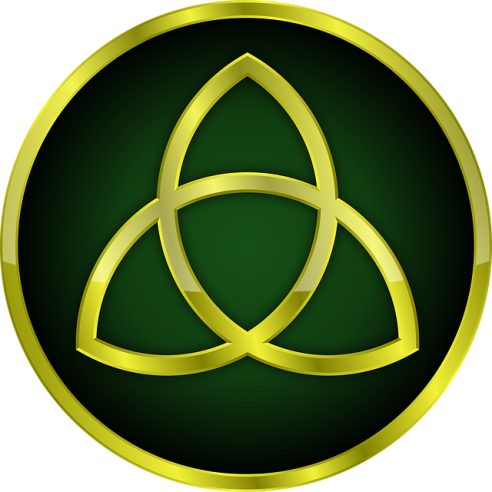 Signs of the same element also are the same with respect to each of the polarities. The aspect between these signs is known as the trine. It is a 120° angle and is based on the number 3. This is the easiest and most harmonious of aspects, and the groupings of three produced by it are known as triplicities. The triplicites are listed below:

In the Traditional/Classical system, there is only one angular aspect possible between signs of a different sect, which is the square. A square is a 90° angle and is based on the number 4. This is an aspect of tension, and it is only possible between signs of the same mode.  Each opposition pair is square to the opposition pair of the same mode, as can be seen below:

I have observed that the squares between the mutable signs are easier than the squares between the other modes. That could be because the nature of mutable signs is less prone to contention than that of the other modes. It could also be that the squares that involve signs of different consistencies are ruled by the same planet. Gemini (day, soft) and Virgo (night, hard) are both ruled by Mercury, and Sagittarius (day, hard) and Pisces (night, soft) are both ruled by Jupiter. It is something to think about.

While signs of different sect only have one possible angular aspect between them, signs of different consistencies have two. The other aspect that is possible between signs of the same sect but different consistency is known as the sextile. This aspect is 60° and it is based on the number 6. This is an aspect of alliance. It is not as harmonious as the trine, but it is friendly, and the signs generally get along well with each other. The sextile groupings are as follows: 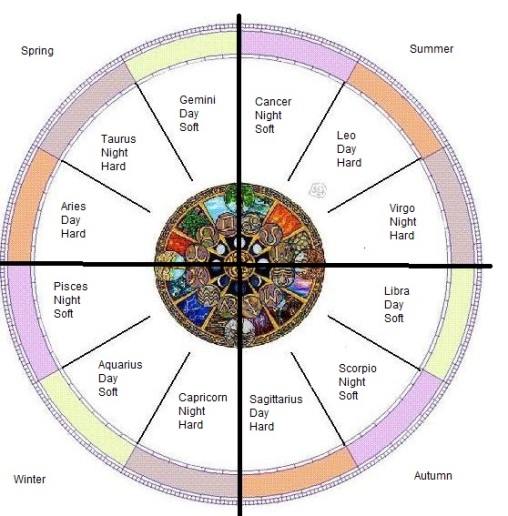 The signs that are antiscia to each other are mirror images along the Solstice line. This corresponds to the times of the year that have the same amount of light and dark. These signs are said to be of equal power and they can “see” each other. This is a positive aspect between signs, and they understand each other. These signs are always of the opposite sect but have the same consistency. Below are the antiscia pairs:

The contra-antiscia are the signs that are mirror images of each other along the Equinox line. These are the signs that are exactly reversed with respect to the amount of light and dark. The sign on the light side of the Equinox has the same length of day as the length of night on the dark side of the Equinox. These signs are said to be able to “hear” each other. These signs are in a commanding and obeying relationship. The sign on the light side commands the sign on the dark side, who obeys. This is a positive relationship as well, but it is not as positive as the antiscia.  These signs are always of opposite sect and consistency. The contra-antiscia pairs are as follows:

In the Southern Hemisphere, the seasons are reversed so it could be that the commanding and obeying signs are also reversed. More research is required to say this with any certainty, however.

This article has introduced the term consistency to discuss the traditional polarity of wet and dry. Consistency is divided into soft, which corresponds with the wet temperament, and hard, which corresponds with the dry temperament. Being able to classify soft and hard consistencies is extremely useful. It explains the various controversies in the world, and it also adds a deeper understanding of the dynamics of relationships between the signs, which are known as aspects.

2 thoughts on “Soft and Hard, The Wet/Dry Polarity and Its Relationship to Astrological Aspects”