After a slow and sluggish couple of months, May will bring us a flurry of transit activity. Jupiter, Saturn, and Pluto are all retrograde and will be through most of the summer. Saturn and Pluto will also be dancing around the South Node in Capricorn for most of this time.

For the most part, the larger planet retrogrades will primarily impact the political sphere and world events. They will be a continuation of the events that occurred at the end of April of 2019. It is probable that nothing will be settled or decided with respect to any of these issues until this coming Fall at the very earliest. Those with important planets and chart points between 18-25° of Capricorn may be personally impacted, as well as those with important planets and chart points in any of the other Cardinal Signs, which are Aries, Cancer, or Libra. 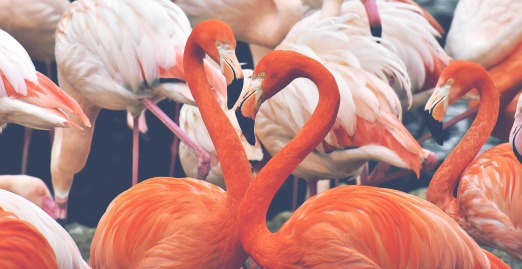 Even with these larger planets going backward, the smaller planets are all moving forward and will be quite busy during May, generating a lot of activity. Those with hot temperaments will feel relief from the stagnation of the past few months, while those with cooler temperaments will need to find ways to get some rest and relaxation so they can keep up.

As has been the case for a while, the month of May will begin with a 3rd Quarter Moon. Generally, this is a time to wind down the affairs of the Lunar Cycle. While often the 3rd Quarter Moon indicates a time that is a bit slower, this is an exception.

The end of April was a powerful time with a lot of changes. Pluto and Saturn almost met at the South Node, but then they both turned retrograde. They will be meeting again in January of 2020, but for now, Saturn is moving away from Pluto. The events that occurred as a result of this transit have given us a lot to think about and to reflect upon, and this reflection will be the task of the end of this Lunar Cycle. 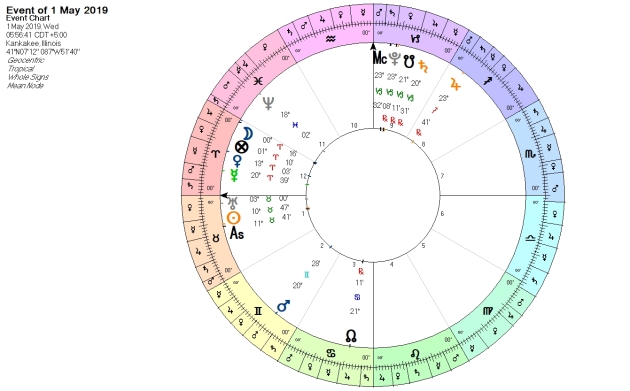 On May 1, Mercury will sextile Mars and square Saturn and the Nodes, and on May 2, she will square Pluto and trine Jupiter. In other words, Mercury will be touching all of the planets that have been the source of the recent disruption. After that, she will be in harmony with Jupiter, the planet that represents our values and beliefs.

This will be a good time to examine recent events in light of what you believe in and what you hold dear. Jupiter is retrograde, and so the theme is not on moving forward but on taking a look back. The issues raised in the past couple of weeks are not going away any time soon, but your values and your faith can be a pillar to hold on to.

In examining the New Moon chart of May 4, one of the most striking features about it is how dry it is. Of the seven traditional planets, the only one in a wet sign is Mars in Gemini. Because Mars is so dry by nature, her being in Gemini does not do much to moisten the chart. This could manifest on a literal level, signifying unusually dry weather during these two weeks. On a symbolic level, however, it marks a period of decision-making.

Most people are aware of the rhythm of hot and cold, which is the same as the rhythm of day and night or of yang and yin. There is another important rhythm to life, which is that of wet and dry.  Moisture brings things together and softens them. Dryness separates things and hardens them. Moisture facilitates growth and harmony, but it can make decision making difficult. Dryness makes it easier to make decisions, but it can destroy harmony and bonds between people. This lunation will make everything seem clearer, but it could be problematic for relationships. 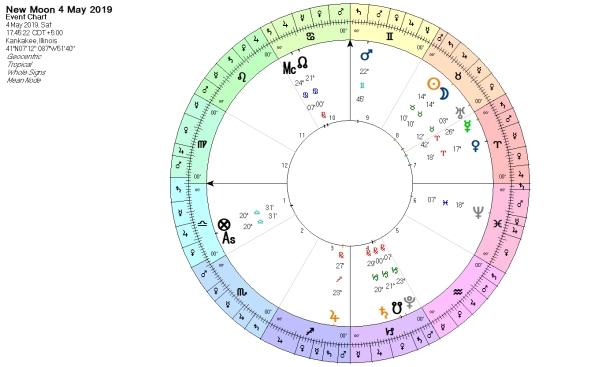 The main aspect in the lunation chart of May 4 is an opposition between Mars and Jupiter. This aspect will become exact on May 5, and it will signify a challenge to the beliefs and the ideals of many people. This will be a literal challenge in that opposing views or factions will come head to head. If you have planets or chart points around 23° of the Mutable Signs of Gemini, Virgo, Sagittarius, or Pisces, you may be personally impacted.

Mercury leaves Aries and enters Taurus on this day. Mercury does not have any special dignities or debilities in Aries or Taurus, so this is a lateral move in terms of Mercury’s strength. On the other hand, this move will decrease the overall level of volatility in the air, and people will be less inclined to argue.

Venus will traverse the same area of the sky that Mercury did at the beginning of the month, squaring Saturn and the Nodes on May 7 and forming a trine with Jupiter and a square with Pluto on May 9. Meanwhile, on May 8, Mercury will join Uranus and the Sun will sextile Neptune.

On the world stage, we are likely to see some successful negotiation regarding the issues that have been stirred up recently, but there could be some unexpected twists and turns. Women’s issues may rise to the forefront as well.

The Sun will trine Saturn and the South Node on May 11 and Pluto on May 13. This aspect is a harmonious one, and it should shed some light on the issues that have been going on recently.

Venus will form a sextile with Mars on May 14, and on May 15, Mars will enter Cancer and Venus will enter Taurus. This move will be a difficult one for Mars, as Cancer is the sign of her Fall. On the other hand, it will be a great one for Venus, as Taurus is her Night House, which is her sign of greatest strength. So, for the rest of this month and into the next, it would be good to remember the old adage “you catch more flies with honey than with vinegar.” Try to avoid fighting with others and making demands. Instead, do your best to be polite and friendly. You will get much more accomplished that way.

On May 15, when Mars and Venus are changing signs, Mercury will form a sextile with Neptune and on March 16, she will form a trine with Saturn and the South Node. This will likely be something that takes place on the world stage or in politics. Although this is a harmonious set of aspects, it will likely involve some sort of deception or cover-up.

May 18 to May 31 – Restored Communication

The Full Moon chart of May 18 is still dry, but it has softened slightly and cooled off quite a bit. There will be a noticeable feeling that things are calmer and more settled than they had been earlier in the month. 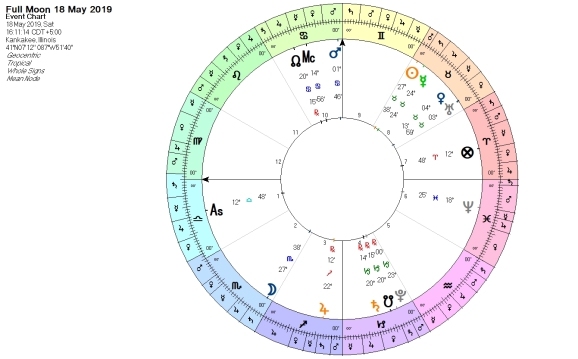 Right before the Full Moon, Venus will join Uranus and Mercury will trine Pluto. These transits could bring unexpected developments, or they could pass unnoticed. In your personal life, remember that we all need people and try not to be too independent.

Saturn will join the South Node again. While the events of the past month or so are not over, after today, they will settle down and take a back burner for at least several months. There will be a sense of getting on with the rest of your life.

The Sun and Mercury will come together and enter the sign of Gemini. This is a great move for Mercury, as Gemini is one of the signs that she rules. Communication will improve for everyone. This move will also lighten the air overall, making room for fun and for enjoyable conversations.

Mars will form a sextile with Uranus. This transit may also go by unnoticed, but try not to get in any conflict. With Mars in Cancer and Uranus in Taurus, any conflict could result in one or both people holding a grudge that could last a long time.

After a week-long transit break, we will end the month with Mercury and Venus interacting with the heavier planets. Mercury will square Neptune on May 29. On May 30, Venus will sextile Neptune and Mercury will oppose Jupiter. Finally, Venus will trine the South Node and Saturn.

After people have had some time off, this will give them time to talk through and work out any issues that have come up over the past month or so, at least for now.