There are big changes coming in 2020 for all of us. With the Equinox and Libra Ingress, we have begun to move towards these changes.

If it were not for the coming changes, this month would be a rather ordinary one. There are about the average amount of transits, and none of them are all that heavy or spectacular. Most of them are the usual transits that occur during this time of year.

Yet, given that there are these monumental changes coming, we can see this month as a time of slow and steady progress towards them.

We start off the month a New Moon Phase. The New Moon occurred on September 28, 2019. If you would like to see a full analysis of it, you can read the transit report for September. As a summary, the focus of this New Moon Phase is on relationships. 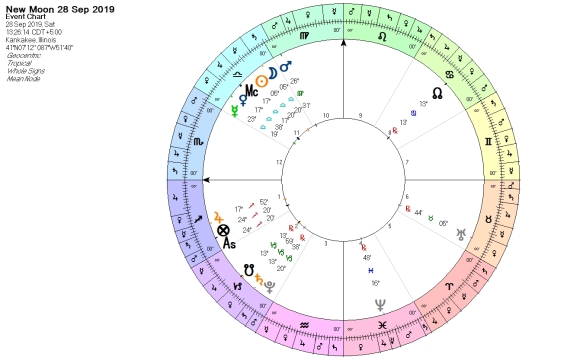 Today will be a busy day with respect to transits. Pluto will be going direct. In most cases, I do not pay much attention to the transits of Pluto. Yet, one of the big transits that will be happening in 2020 is a Saturn/Pluto conjunction, and Saturn had gone direct on September 18. This makes this transit one of the steps along the way to the coming changes.

This will mark the First Quarter Moon Phase. This is when the projects that started during this lunar cycle will begin to materialize into their future form.

The Sun will square the North and South Nodes on October 6 and square Saturn on October 7. These will likely be heavy news days with an emphasis on themes that will foreshadow the changes to come.

Mercury will also oppose Uranus on October 7. This could create difficulties with communication if you allow it. Try to avoid being overly independent. We all need other people.

Venus will be moving from Libra into the sign of Scorpio. This is a bit of a difficult transition, as Venus is in detriment in this sign. This is a time for deep and courageous honesty in your relationships, and it has a strong potential of being a time of healing if you let it.

This is a transit that happens around this time of year every year, however, so it is a part of the ordinary cycle of life.

Today, Venus will be opposing Uranus. You may be tempted to get into a fight with those you love, and you may even be tempted to sever important relationships. If you are tempted to do so, it is best to wait a few days, and not do anything in haste or anger.

It could be that there truly are serious, irreconcilable differences, but if that is the case, it will still be obvious when the pressure of this transit is over.

The Full Moon will occur on October 13. Jupiter in Sagittarius is in a nice, tight trine with the Moon and sextile with the Sun. This will make for a productive and fortunate month.

Saturn is square the Sun and Moon, but it is a wide square and separating. There will be a sense of having recently overcoming difficult obstacles and feeling stronger because of it.

Pluto, on the other hand, is in a tight applying square with the Sun and Moon. For the most part, this will not have a personal impact on most people, but it will very likely have a heavy impact on world events in a negative way, and it is a step along the current march towards change.

Mercury is sextile Saturn. This is a rather minor aspect, but it will add a level of seriousness and gravity to communications during these next couple of weeks. Mercury is also moving into a trine with Neptune which could confuse issues if you let it.

The Venus opposition to Uranus that occurred the day before will be in effect during this lunation. Because of this, it is best not to make any major decisions about your relationships until after the New Moon on October 28.

Today the sextile between Mercury and Saturn and between the Sun and Pluto will be exact. There is likely to be a big event in the news today, which will be an important part of the chain of events that is to come on the world stage.

Mercury is trine Neptune today. Your judgment may be cloudy today, so try to avoid making major decisions. It is fine to daydream, just don’t take your thoughts or ideas too seriously.

Venus will trine Neptune. You will want to be careful in your relationships, and be especially careful of any new relationship that starts today. Your judgment will be impaired, and you will be seeing others through rose-colored glasses. There is nothing wrong with enjoying any good feelings that you are having, just don’t take them too seriously or make any decisions based on them right away.

Today also marks the Third Quarter Moon. This is the end of the lunar cycle. It is not a good time to start anything that you want to last for a long time. Instead, this is a time to finish up projects. It is also a good time for cleaning and getting rid of things, as well as for doing things that you want to be over and done with quickly.

The Sun will enter the sign of Scorpio today. This is an annual event that marks the entry into the darkest part of the yearly cycle.

For more information about the sign Scorpio, please read this article.

Venus will sextile Pluto. This is a minor transit, which will go unnoticed by most. There could be some temptation to give in to darker and unwholesome impulses, especially when it comes to relationships. If you avoid such temptations, however, you should be fine.

October 27 marks the New Moon and the beginning of a new Lunar Cycle. The New Moon will have 4 planets in Scorpio. In addition to the Sun and Moon, Mercury and Venus will also be in this sign.

The heavy emphasis in Scorpio will help this. The best thing to do will be to take a step back and make a list of your long-term goals with short term steps necessary to reach those goals. If you already have such a list, take it out. By focusing on this list, you will be able to step back from the feelings of frustration coming from the Mars/Saturn square.

The Sun will be square Uranus today. This could be a difficult transit if you let it. Be careful of allowing pride or ego to tempt you into being overly independent. It is a good time to practice gratitude for the people in your life that you love.

Mercury will be conjunct Venus. This should be a good day for communication with your loved ones. If you got tempted into an argument a couple of days before, this will be a good time to reconcile.

Today Mercury will go retrograde and will be retrograde until November 20, when it will go direct. This could create difficulties with communication, and it will be a good time to double-check everything that you do. This Mercury retrograde will occur in Scorpio. Given the nature of this sign, it will be a good time to start therapy or anything involving deep reflection. On the other hand, there is also a danger of spending time brooding so beware of dark thoughts and feelings.

For more information about Mercury Retrogrades, see this article.

2 thoughts on “Transits of October 2019 – Marching Towards Change”