In chart work, I have always looked at secondary progressions, but, to be honest, I was never able to glean much information out of them, except for a bit from the progressed Moon.  In my study of eclipses, however, I read The Eagle and the Lark, by Bernadette Brady, and I learned about the practice of reading the progressed chart in its own right, rather than just against the backdrop of the nativity chart.  Of particular interest was the practice of using the Lunar Phase of the progressed chart.  I had never tried this technique in the past, so I tested a few charts to see how this technique worked, and in the charts that I tried, I found it to be amazingly accurate.  So much so, that I was able to glean a tremendous amount of information from the progressed Moon Phase alone, without considering any other technique.  Other techniques provided additional information, but from what I could see, the progressed Moon Phase provided a broad brush backdrop against which other cycles could be analyzed.

While the technique of secondary progressions has only become popular in recent centuries, the underlying Principle behind them is deeply Traditional. Each day after the native’s birth represents the corresponding year of her life. A day is a microcosm of a year. One can even find this concept in the Judeo-Christian written tradition. Ezekiel 4:5-6.  The times of day also correspond to the seasons of the year.  Dawn corresponds with Spring, Noon corresponds with Summer, Sunset corresponds with Autumn, and Midnight corresponds with Winter.  Indeed, in most solar calendars, the start of the day and the start of the year correspond.  In modern Western culture, we start our year shortly after the Winter Solstice and our day at Midnight.  In the Jewish calendar, the year starts in Autumn, and the day at Sunset.  Astrologically, the new day starts at Sunrise, and the New Year at the Vernal Equinox.

The beauty of the progressed Moon Phase is its simplicity.  It can be read in the same manner as the monthly Lunar Phase, only on a much larger scale.  Each Lunar Phase has analogies in the day and the year.  The New Moon corresponds to Spring and Sunrise, the First Quarter Moon to Summer and Noon, the Full Moon to Autumn and Sunset, and the Third Quarter Moon to Winter and Midnight.The lives and reigns of Queen Mary I and Queen Elizabeth I of England provide a clear illustration of the effect of the progressed Moon Phase.

We begin our story with Princess Mary, who was born on February 18, 1516 OS. She

began her life as the beloved daughter of King Henry VIII and Queen Catherine, the first and only child born to them that would survive infancy. She was born under a Full Moon. When she was around nine years old and well into her progressed 3rd Quarter Progressed Moon Phase, it became clear that her mother would not give birth to any more children. This proved disastrous for the young Princess. Her father became enamored with Anne Boleyn, and her mother’s marriage was in jeopardy, as was her position.

Princess Mary’s progressed Moon would become New again in 1530. This would begin a new cycle that would last approximately 30 years. Shortly after this time, her mother was banished from court, and her mother’s rooms given to Anne Boleyn. The Princess was declared illegitimate and removed from the line of succession. As the Princess was in a progressed New Moon phase, this was not a temporary setback, but a reality that would dominate her next progressed Lunar Cycle, and as it turned out, the rest of her life. 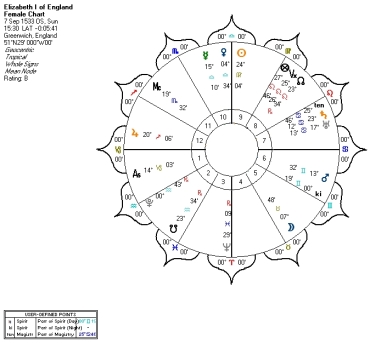 Princess Elizabeth was born on September 7, 1933, as the daughter of Anne Boleyn and King Henry VIII. For a short time, she was the favored daughter and the heir presumptive. Her elder sister, now Lady Mary, was sent to be a part of her household. Yet, her time of favor was short lived. When she was two and a half years old, her mother was executed, and she like her elder sister, she was declared illegitimate and removed from the line of succession. At this time, her progressed Moon was near the end of the Full Moon phase, moving into the 3rd Quarter phase.

In October of 1537, Lady Elizabeth’s progressed Moon moved properly into the 3rd Quarter Phase. At this time, her younger brother Prince Edward was born, who was the undisputed heir apparent. As Lady Elizabeth’s demotion occurred in the waning progressed Lunar Cycle, one could expect her fortune to change at the next progressed New Moon.

While Lady Mary did achieve some reconciliation with her father, along with some restoration of favor, her younger sister’s demotion did not restore her to the line of succession.

In the spring of 1544, the Third Succession Act was approved by Parliament and passed by royal assent. This Act, backdated to 1543, restored both sisters to the line of succession, after their younger brother. At this time, Princess Mary was at the end of her progressed 1st Quarter Phase moving into the Full Moon Phase and Princess Elizabeth was at the end of her 3rd Quarter Phase moving into the next New Moon cycle. For Princess Mary, this was the harvest, the height of the cycle. For Princess Elizabeth, this was a new beginning.

Queen Mary I ascended to the throne in August of 1553 after the death her brother and the defeat of Jane Grey. At this time, she was in her progressed 3rd Quarter Moon Phase. This did not bode well for a long reign. In contrast at the time, Princess Elizabeth was in her progressed 1st Quarter Moon. Queen Mary’s star was falling, and her sister’s star was rising.As might be expected, Queen Mary I the first did not have a long reign. She died on November 17, 1558, without issue, when her progressed Moon was at its final stage of its cycle, the Dark Moon.

At the time of Queen Mary’s death, Queen Elizabeth I was approaching a progressed Full Moon Phase. When she ascended to the throne, she was at the height and fullness of her power. As might be expected, her reign was long and influential.

When her progressed Moon reached the 3rd Quarter Phase, it became clear that she was not going to marry, and thus, not produce any bodily heirs.

Her next progressed Lunar Cycle began in January of 1574 with a progressed New Moon in Scorpio. Shortly before this time, Sir Francis Walsingham became her spymaster. This Cycle reached its height with the progressed Full Moon in 1588, the year of the defeat of the Spanish Armada. At the end of the Lunar Cycle, during the Dark Moon Phase, Queen Elizabeth I died, and like her elder sister, died without issue.

As an interesting historical tidbit, in 1620, there was nostalgic revival in the popularity of the late Queen Elizabeth I. Had she survived, this would have been right after her next progressed Full Moon Phase.