I talked a little about the upcoming Lunar Eclipse in my article concerning the current transits, and I debated whether to specifically discuss it. As the eclipse draws closer, I have decided that I probably ought to.

From a metaphysical perspective, eclipses are a temporary triumph of Darkness over Light. From the perspective of applied astrology, some eclipses are more problematic than others.  This coming eclipse has the potential to be quite problematic, which is why was I was not sure I wanted to talk about it. I did not want to publicly spread any more doom and gloom than is already out there. As I thought about it, however, I remembered that I am a firm believer that humans are Axial Beings with Free Will, and thus it is within our power to fight the power of the Dark, and that if we do, Light will prevail. With this in mind, I realized that there is some potential good news in this coming eclipse and that there are specific things that we can do to protect ourselves from the Dark and to support the Light.

So, with that in mind, I will take a deep breath and share my analysis.

As an astrologer, it is hard not to look at the chart of the upcoming Lunar Eclipse without trepidation. 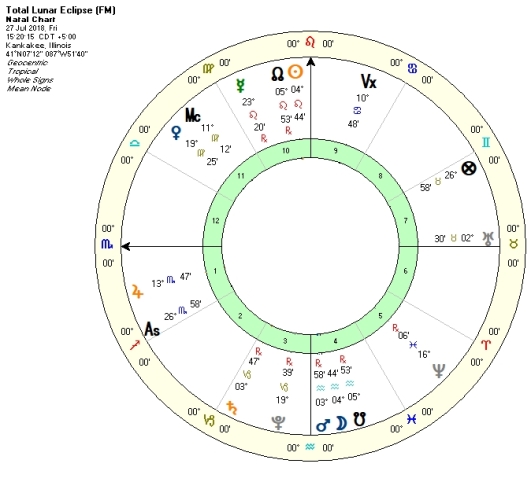 The first, most obvious difficulty with this chart is that there is a retrograde Mars that is is right next to the Moon and South Node and opposed to the Sun. The next problem is that Uranus is squaring both sides. These two factors in and of themselves are enough to make an astrologer cringe. Jupiter is in Scorpio, and by the traditional understanding of orbs and moiety, both the Sun and the Moon have very large orbs, and using these orbs, Jupiter is also square the Sun and the Moon. Thankfully, Jupiter does not square Mars or oppose Uranus, so we are not looking at a full Grand Cross.

Other difficulties are that Mercury is retrograde in Leo, and Venus is in her fall in Virgo. In addition to this, it will be the longest Lunar Eclipse of the century, with a period of totality of 103 minutes. Recently, I read that there is eclipse lore that a total Solar Eclipse will have a period of influence of one year per minute of totality where it is visible, and by this same logic, a Lunar Eclipse will have a period of influence of one month per minute, with the full effect not being seen until the end of the period. This would give this eclipse a period of influence of 8.53 years! This Lunar Eclipse will not be visible in North or Central America, but it will be visible in the rest of the world. The place of greatest visibility will be the Middle East and East Africa. While the long term direct influence may be restricted to the places of visibility, in the modern world, we are all connected in many ways across the globe, so I think that there may be indirect influence from the Eclipse even where it is not visible.

Another way to analyze eclipses is through Saros Cycles. Eclipses come in families, and a similar eclipse will touch down approximately every 18 years. The Saros Cycles are born, they last 12 to 15 centuries, and they die. Eclipses also come in seasons. An eclipse season will contain at least one Solar and one Lunar Eclipse, and some eclipse seasons, like the present one, contain three eclipses.

The coming Lunar Eclipse is from Saros Series 129, and it began on June 10, 1351. The total eclipses from this series began with the eclipse of May 24, 1910, and using the rules of visibility and a month of influence for every minute of totality, with the full results being seen at the end of the period of influence, this eclipse Saros Series seems to be involved in the start of both World Wars of the 20th Century and with “The Troubles” in Northern Ireland starting in the late 1960’s. I think the reader can see where my trepidation came from. Usually, astrologers pay much more attention to Solar Eclipses than to Lunar ones, but this particular Lunar Saros Series seems to have been a rather turbulent one.

In looking back to the first eclipse of this series, I was rather surprised. I expected to find a large Mars signature, but instead, I found this:

In tracing the disposition pattern using the method I discussed in this article, I found that the final dispositor of this chart is Mercury! Mercury, not Mars! So, it seems like the trouble with this Lunar Series began with an idea. In searching for the idea that could have caused all of this trouble, I uncovered a gentlemen by the name of John Wycliffe, who began what is known as the Lollard movement in England in the mid-14th Century, and who did the first English translation of the Christian Bible from Latin. This was a precursor to the later Protestant movement. John Wycliffe was a contemporary of John of Gaunt, who was one of the ancestors of Tudors through his great-granddaughter, Margaret Beaufort.

I could not trace the eclipse to a specific event in the life of John Wycliffe. It seemed to have occurred when he was at university. The eclipse was a tiny Appulse Eclipse at this time, so it would not be surprising that it would not yield an outward event. I do find it highly likely, however, that this is when he started to have the ideas which developed into his later teachings.

The Solar Eclipse associated with it was from Solar Series 115, the same series of the eclipse that occurred two weeks ago, which is now in its last breaths. The Solar Eclipse from that series in 1351 was total, but it was only visible in central North America. I was not able to find any information for what might have occurred, as this was before the European arrival, but it likely played no role in Europe or England at that time.

I have no intention of entering the debate between Catholicism and Protestantism; however, I think it goes without saying that this debate caused a great deal of turmoil in Europe, and this turmoil was brought to the Americas. This debate was most certainly at work in “The Troubles” in Northern Ireland and likely played at least some role in both of the World Wars of the 20th Century.

With all of this in mind, I think we can go back to the current eclipse to see what to do about it.

Let’s take another look at the coming eclipse.

In tracing the disposition pattern of this chart, it does not have a final dispositor, but it has two lines of disposition. One line led by Saturn, containing Jupiter, Mars, and the Moon, and another line led by the Sun, containing Mercury and Venus. The Leo Sun is by far the strongest planet in the chart, being the ruler of Leo and a triplicity ruler of fire. The next strongest planet is Saturn in Capricorn, but Saturn is also retrograde.

While there seem to be two “teams” involved in this chart, these teams are not in direct conflict with one another. Indeed, they are adverse, meaning they can not “see” each other at all. In such a volatile chart from a volatile Saros Series, this to me seems like a ray of hope.

In the direct conflict between the Moon/Mars conjunction and the Sun, the Sun is the clear winner. The Sun represents, among other things, Truth and Light. Saturn, the dispositor of the problematic Mars is off to the side in Capricorn, quietly getting on with her work.

There is still the rather difficult Uranus, but I really do believe that Uranus can be neutralized by making the decision to stay within the bounds of community and tradition. Pragmatic Saturn should be an aid with this as well.

I believe that while eclipses are periods of Darkness, they can also be a time of repentance and turning to the Light. There is a famous story of an eclipse that stopped an ancient war. Both sides believed that the eclipse was an omen from the gods, and they signed a truce. I believe that we can similarly use this coming eclipse to bring peace to our lives, at least on a personal level.

In this spirit, here are my recommendations:

I will end from two passages from The Gospel of Our Mother God that I think will help through this coming Eclipse.

Let the soul rather fill her dwelling with the warmth of love and generosity, with the sweet, cool air of purity, with the flowers of simplicity, humility, and gentleness.

Let her garden flow with the fountains of virtue and lie open to the sunlight of our Mother’s love.

Let the soul only lie open and the sunlight will stream in, filling her with joy and warmth and beauty; for truly your Mother loves you and delights in giving Her grace.